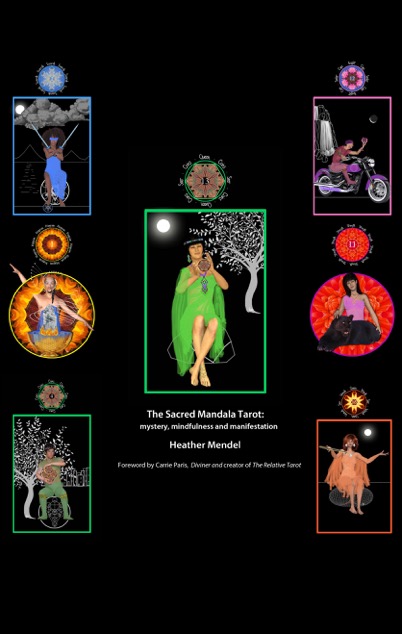 These are the opening words of The Sacred Mandala Tarot book that accompanies the deck of the same name.

“Do you believe the future already exists, pre-ordained and prescribed, providing for us the role we are destined to fulfill? If you do, it does. By honing your psychic skills, you may well be able to predict the future.

Do you believe the future remains forever unscripted, evolving from the present thoughts we think, beliefs we hold and choices we make —a mysterious realm of potential and possibility forever just beyond our grasp? If you do, it does. You may not be able to predict the future but you can deepen your intuitive skills to sense the patterns and choices of the present moment, knowing which questions to ask to make the wisest decisions possible.

Future formed or future forming? The choice of belief is our own— both options lead to the same yearning to develop the spiritual senses. By so doing, we are able to see a broader, deeper, fuller reality. The intuitive voice is always present, often drowned out by an incessant inner chatter of the mind at work, or from a surge of powerful emotion that for a while, takes front stage, somewhere on the spectrum from pleasure to pain, on which we focus our full attention.”

We do not see the world, said Anais Nn, as it is, but as we are. Just as each reader brings their own belief to the interpretation of the cards, so too for those who design the cards. With this deck, The Sacred Mandala Tarot, the use of sacred geometric imagery— the Torus, Metaron’s Cube, The Flower of Life out of which The Tree of Life evolves— sets a spiritual tone for the cards which gives the deck a universal appeal rather than a specific religious one; the black background of the cards honors the mystery out of which all things intuitive emerge.

The illustrations are decidedly minimalist to allow the body language and facial expressions of the diverse characters speak to the readers as they mirror the richness of the multi-ethnic, cultural and gender diversity that is part and parcel of contemporary American life at the start of the 21st century. This is evident in their clothing, accessories and hairstyles (the character in 4 of Coins even has a tattoo.) 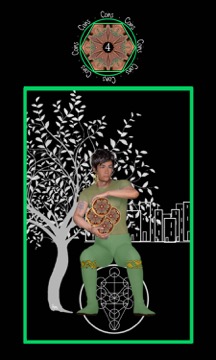 Here, motorcycles replace horses as vehicles for the Knights, and a wheelchair instead of crutches assists the mood in the 5 of Coins. Modernizing the setting of the deck that still carries archetypal themes, in addition to leaving the names of Court cards intact for those who are familiar with traditional decks, the titles Student/Page, Seeker/Knight, Seer/Queen and Sage/King are added to these cards. 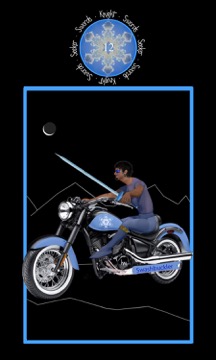 Honoring kabbalah as a background from which Tarot emerges, the theme of the 4 Worlds align with the 4 Suits in the Minor Arcana. In place of the ‘little white book’ that normally accompanies a deck, the book, The Sacred Mandala Tarot: mystery, mindfulness and manifestation provides a full context for the images and themes to consider when reading the cards— particularly evident when considering the Suit of Swords and the doubled edged boundary between thinking/Being. Based on the teachings of Tolle and Chopra, this book stresses the importance of mindfulness in the manifestation process, reflected in the 7 of Cups, we are reminded to be careful what we wish for. 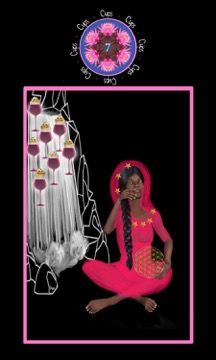 Believing that the future is not prescribed, by looking carefully at the present, and examining our beliefs, expectations and thoughts, we can make the most informed decisions possible with every choice we make.

What author-readers have to say:

Author-artist Heather Mendel’s newest gem, The Sacred Mandala Tarot and its fine companion text, sparkle with the voice of a sage and the artistry of a sensitive intuitive. She brings to contemporary Tarot the perfect admixture of timeless wisdom, a savvy eye for precision in both image and language, and an intelligent impatience for the unnecessary. With wide knowledge of her subject matter extending well beyond Tarot, Mendel has given us in The Sacred Mandala Tarot not simply a marvelous tool for self-empowerment and reflection, but a clear invitation to take ownership of our beliefs, reshape them as we choose to in the service of our creative intuitions, and follow what we know in our hearts. Where most new Tarot decks are at best artful or novel executions of the old, this work is a synthesis of all we have learned about transformation to date in line with the evolution of what is to come. Recommended for deep tarot work.
Arthur Rosengarten, Ph.D., author of Tarot and Psychology: Spectrums of Possibility and Tarot of the Nine Paths: Advanced Tarot for the Spiritual Traveler.

“Heather Mendel’s tarot deck, The Sacred Mandala Tarot: mystery, mindfulness and manifestation, is a breath of fresh air in the ever-growing genre of Tarot decks. In addition to being visually stunning, its vibrant artwork does a masterful job of stimulating both the intuitive and intellectual processes that are so important in interpreting the Tarot. Its unique blend of traditional Tarot, the Kabbalah and nature, as well as its depiction of the ethnic, cultural and gender diversity of our modern world powerfully enhances the practitioner’s ability to make full use of all of their senses in their quest for knowledge.”
Sheilaa Hite, author, The Infinite Tarot and other titles

“The Sacred Mandala Tarot is both portable art gallery and effective self-coaching tool, skillfully uniting the eternal with the temporal. Gorgeous circular symbols of wholeness meet tee-clad 21st century characters who look like you and me, a reminder that ageless wisdom can be found in everyday existence. Heather Mendel’s sensitive renaming of the court cards is an invitation to contemplate these images in the context of a consciously examined life in order to transform all of us who employ this deck and its accompanying text from students into sages. Heartily recommended!”
James Wells, author, Tarot For Manifestation and other titles

“Heather Mendel has taken a delightful and vivid approach to a Tarot deck that is both multi-cultural in the best sense, and symbolically stimulating. There are some wonderful images here.”
Rachel Pollack, author, Seventy Eight Degrees of Wisdom, and other titles.