Ask most people what they think about when they hear the word ‘oracle’ and chances are their thoughts go back to ancient times and temples where priestesses, shamans, diviners, astrologers, soothsayers and fortune-tellers offered their counsel, guiding the destinies of families, tribes and even nations. Not much has changed really— the oracle still speaks, but in our rush towards accepting scientific, rational, logical and linguistic left-brain function as the only valid path to knowledge, we have stopped listening. Perhaps what is different now, as we participate in the present radical transformation of human consciousness that is underway, is that our attitude to the oracle has changed and we are ready to understand that it merely confirms and reminds us of an inner sense of knowing that has been with us from the start. She speaks to us all rather than just to a select few. How do we best attend to the intuitive? By practicing the skills we already have — and the use of divination tools like the Lenormand Oracle is extremely helpful.

Named in honor of the psychic Mme. Marie Anne Lenormand, card reader and prognosticator ‘par excellence’ to Josephine and Napoleon, this oracular deck consists of 36 cards, each illustrating a simple object. The deck is not what she used because she read from a regular playing deck, but these cards honor her memory and ability. In a simple, graphic way, using the medium of storytelling, the cards deepen our intuitive skills. Each card bears a single symbol and the name and number it holds in the deck. 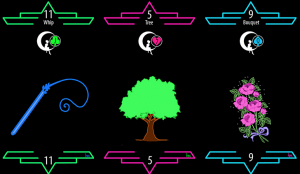 In addition, to allow for more in-depth reading, Lenormand cards include the number and suit associated with it from the normative playing cards. The cards are read in combinations to answer a specific question that will set the context of the reading. Spreads can be done with any odd number of cards, 9 being the most informative spread other than the Grand Tableau which uses all 36 cards.

The Lenormand Oracle, simple to read and use, is gaining in popularity. Straightforward and to the point, it is far less nuanced and layered with symbolic meaning than the 78 images of the Tarot which is divided into Major and Minor Arcanas.

The Magic Moon Lenormand is named in honor of the store in Saratoga Springs, NY in which I first started reading Lenormand for clients. This deck is a little different from others on the market in several ways:

The set comes with two decks (a Tarot sized deck and a mini) as well as the workbook. The different size decks offer a choice of either one for smaller readings, but with the Grand Tableau in mind, I designed the larger deck to eliminate the need for a special cloth or template on which to organize the Houses. The larger cards are laid out in sequence and the smaller deck is shuffled by the querent and laid out by the reader on top of the larger cards— thus both reader and querent are able to see, at a glance, the cards and the Houses in which they lie.

In illustrating a contemporary deck with simple, clear silhouettes, I discovered that it is very challenging to show ethnic differences in the human family, which is a lesson itself! I have included Man and Woman with different 3 images in the large deck. Readers can choose their preferences. The cards are color-coded to make identification with the related suits easier. My color choices are arbitrary as the playing deck is red and black on white. My backgrounds are black to honor the mystery in which we all dwell. The emblem of Diamonds, Spades, Hearts and Clubs appears in the logo at the top of each card with the appropriate number e.g House (4) King of Hearts. The border element in each card is similarly colored— yellow for Diamonds associated here with Tarot’s Wands for Intuition; blue for Spades (Tarot’s Swords for Thought/Being), pink for Hearts (Tarot’s Cups and Emotions) and green for Clubs (Tarot’s Coins or Physicality.) With its color-coding, this is the deck I wish I had when I first started using Lenormand.

In my interpretations of each card, I have based my understanding of each symbol on the kabbalistic notion of four layers of meaning — the literal, the symbolic, the allegorical and mysterious (which we access by spiritual intention.) Additionally, I see each card carrying a spectrum of potential meaning whose interpretation I include.

My own experience in learning to use this oracle has served me well in preparing the workbook— I offer what I learned as I went along and what I share with others who wish to start the journey. I remember well following the instructor’s examples of reading two cards together, yet when it came to connecting two new ones, I felt challenged. To assist beginners, I offer (as a download on my website) a suggested list of pairs for every card in the deck. As you will discover, you will learn quickly enough to make your own personal connections, eliminating the need for a ‘dictionary’ but for beginners, it is a comforting aid. Included in the download is a full-size color keyword chart and a template for recording your impressions of a Grand tableau reading that I hope will be helpful.